Down two starters Watkins team put forth the effort and work you come to expect from his teams to run away for the win to give their coach a DeKalb County leading girls’ coaching record of 500-188 (currently 501-189).

“I was nervous going into the game not having any film on Hapeville and with us having two players out (one player gone on a college visit and another out with an injury),” said Watkins. “But the girls did what they have done at Stephenson for years and other players stepped up to get us over the top.”

Getting that 500th win and his success over 24 seasons as the Head Coach at Stephenson was something Watkins had no idea it would turn out that way.

Stephenson High School Principal Wanda Guillard was looking for two new basketball coaches for the 1998 season and Watkins had applied for the boys’ head job. Guillard brought him in and told him that job was filled and asked if he would take the girls’ position.

Watkins said yes and went through his first two years working hard, but not getting the results he and the team wanted.

“I had no idea how this would turn out, especially going 9-11 and 3-22 in my first two years,” said Watkins. “Once the players and community saw I was dedicated to the job they responded.”

His third year saw his hard work start to pay off as his squad went 16-10 and reach the playoffs. His fourth season produced an Elite Eight berth at 25-3. In 2003 his team made a run to the state finals before losing the championship game to Parkview 43-37.

“I told the girls then and now we have to stay disciplined, stay the course, keeping working hard and things were turnaround,” said Watkins. “Reaching the state title game in 2003 showed the players, myself and the community what the program was capable of if they kept working. Then we went out and beat Maya Moore and Collins Hill in 2004 for the championship.”

Watkins said seeing all those big-name college coaches like the late Pat Summitt (Tennessee), Geno Auriemma (UConn) and Andy Landers (Georgia) coming in to scout the players in that championship game was thrilling. 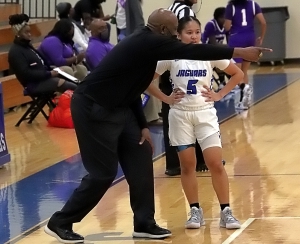 “We were the only Georgia team to beat Collins Hill with Maya Moore and they went on a big run following that year including beating us twice in the state semifinals,” Watkins remembered.

Stephenson would go on to win the 2008 state title over DeKalb rival and region foe Redan 58-43.

Defeating Mays 65-56 for the 2015 state title was a most satisfying title for Watkins whose team had lost two regular season games to Mays and a region tournament game. A big defensive stand in the final quarter shut down the Mays offense limiting it to just two points.

“I tell the girls you are going to lose sometimes, but they needed to keep working and trust me and good things would happen,” said Watkins. “The players over the years have kept that work ethic and it has been a trademark of this program and community.”

One thing Watkins is most proud of is helping over 70 players get scholarships to college and having many of those in professions such as doctors, firemen, physical therapists and the armed forces.

“Getting players the opportunity to go to school for free is always our goal,” said Watkins. “We stress their academics and work with them throughout the year to keep them on course.”

He also appreciates the former players and community who have recognized his dedication to the game and the students themselves.

“It is a great feeling to have players, parents and people in the community to thank me for what I’ve done over the years,” said Watkins. “It has always been about them, not me.”