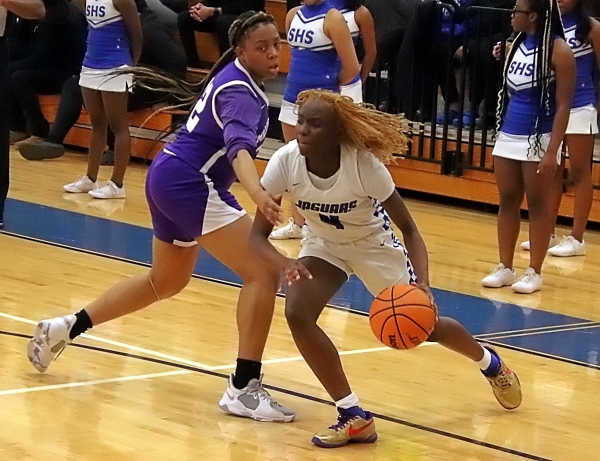 The Stephenson Lady Jaguars were one of five DeKalb high school basketball teams to earn state tournament berths on Tuesday as they defeated the Miller Grove Lady Wolverines 57-37 at Stephenson in the Region 6-4A girls’ quarterfinals.

A 14-2 run in the second quarter put the Lady Jaguars (13-9) up 29-11 at the half and they never looked back. Tahj Hunter and Kelli Finkley scored five points each in the run to spur on the run.

Finkley opened the second half with the first seven points of the third quarter for Stephenson as the lead grew to 36-13 and finally 40-19 heading into the fourth quarter.

An 18-point, 7 rebound performance by Finkley led the way for Stephenson. Tahj Hunter added 10 points. Miller Grove got 12 points from Lindsey Myles, 11 points and 8 rebounds from Trinity Coleman and 22 rebounds by Jaylen Clark.

In other girls’ action at Stephenson, Mays upset Druid Hills 57-54 to end the Lady Red Devils (13-13) season. Chloe Evans hit for 13 points and grabbed 14 reobunds in the win for Mays. Kaitlyn Robinson hit for a game-high 23 points, Kyia Craft added 12 and Iona Atwaters 10 for Druid Hills.

The Hornets turned the game around by holding Miller Grove to just two second quarter points to take the lead for good and leading 19-13 at the half. L. Seales had 22 points to lead Hapeville and C. Riley chipped in 14 (12-14 free throws). David Brooks Jr. had 10 points to lead the Wolverines (14-11).

Mays 70, Stephenson 59
The Mays Raiders held off a Stephenson Jaguars’ fourth quarter rally on the way to a 70-59 victory in the other boys’ quarterfinal.

Stephenson jumped to a 9-2 lead only to Mays take control of the game with its outside shooting knocking down three in the period including back-to-back from behind the arc by Mykel Williams as the Raiders (15-9) went up 19-11.

Down by as much as 16 points in the second the Jaguars (9-16) mounted a late rally aided by seven points from Ashton Lattimore and six by Stephen Lewis as the cut the lead to 5 points before Mays held them off hitting 10 of 14 free throws down the stretch. Williams had a game-high 24 points to lead Mays. Ashton Lattimore hit for 20 points to lead Stephenson and Stephens Lewis added 17 and 13 rebounds.

The Columbia boys and girls’ teams advanced to the Region 6-2A semifinals with wins of 61-36 over KIPP and 46-21 over Coretta Scott King. The wins secured state tournament berths for both teams.

Cedar Grove advanced to the Region 5-3A girls’ semifinals with a 64-25 win over Sandy Creek. The win earns the Lady Saints a trip to the Class 3A state tournament next week.